Peggy created the portraits while working as a freelance artist  “I drew anybody who came to London to talk to the government or to speak”.  She caught her subjects in concert, lecturing or at press conferences, often adding their words or musical notes.  Her career began thanks to Fenner Brockway, who, impressed by a drawing she made of him, asked her to draw regularly for the New Leader, a paper he then edited.  Previously she had worked for the League of Nations,  giving up art school to work for peace. 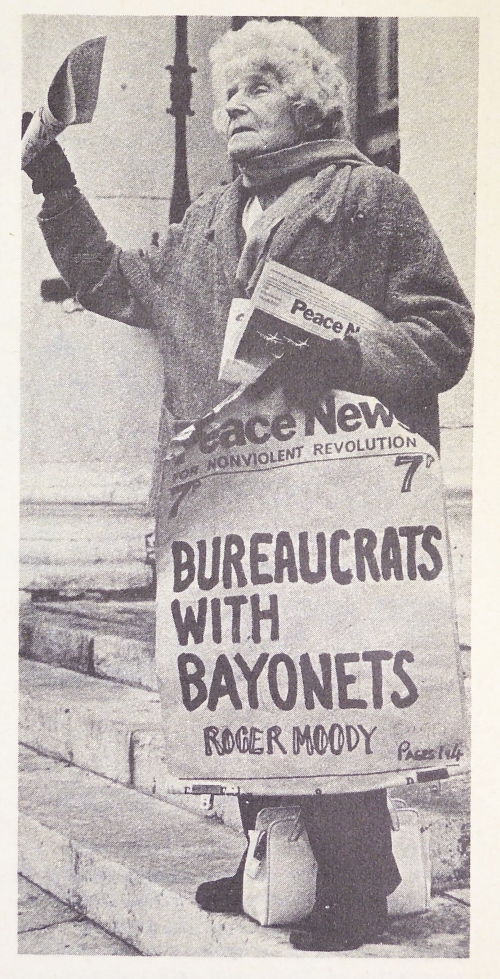 In 1936, Peggy Smith was one of the first women to sign the Peace Pledge; she knew (and drew) many of the Peace Pledge Union’s sponsors, being particularly influenced by Gerald Heard.  She also drew for Peace News, founded that year.

After the Second World War, Peggy joined the Campaign for Nuclear Disarmament, was arrested 11 times for her involvement in Committee of 100 actions, and in 1968 travelled to Cambodia as part of a non-violent action group to draw attention to the American bombing of North Vietnam.  She continued to work for Peace News, selling copies on the steps of St Martin-in-the-Fields.  She had little time to pursue artistic interests.

However, in 1973, she showed her drawings to friends who recognised their artistic and historical value. Thanks to their efforts, in 1975, she held her first exhibition: Music and Line showed her drawings of musicians, in the appropriate setting of the Royal Festival Hall.  During the 1990s, Margaret Glover, an artist who has made a doctoral study of images of peace, helped to arrange for the drawings to be deposited with Commonweal Library.  They are now in the care of Special Collections. 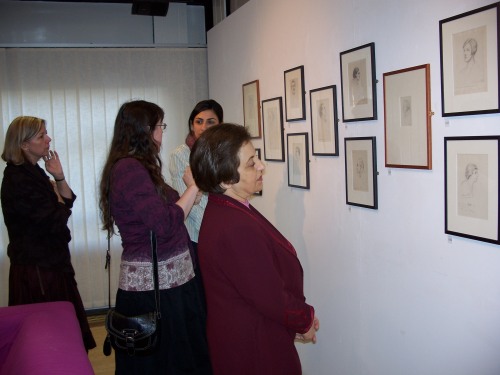 Launch of the Peggy Smith exhibition 2009. In foreground, Nobel laureate Shirin Ebadi, who opened the exhibition.

We have never been able to do justice to Peggy Smith’s drawings in reproduction. A long-cherished plan to display the originals came to fruition in 2009 with an exhibition, Peggy Smith – Drawing for Peace, curated by Alison Cullingford, in the University’s Gallery II.  We hope to show more of them in future; meanwhile they can be seen by arrangement with Special Collections.  Peggy Smith’s drawings of peace campaigners are regularly on show at the Peace Museum.

With thanks to: Paul and Ellen Connett and Commonweal Library.