Special Collections is closed for the Christmas break from 23 December-3 January inclusive.   Join us then to meet the last 5 Objects in this exhibition.  Meanwhile, we’d like to wish everyone a very merry Christmas and a happy 2014.

Our Christmas greeting, featuring a Poinsettia from one of our favourite books.

In Object no. 41 we glimpsed some Christmas fun at Bradford Technical College.

Posted in About the Exhibition

These striking images are from a collection of historic medical books gathered by Dr Calvin Wells.  This unfortunate child has “measels”: he appears in the frontispiece of Domestic Medicine, by William Buchan. New ed. 1782, along with illustrations of smallpox, ring worms, scald head and various intestinal worms.  Buchan’s work was aimed at the general public and proved very popular, running into many editions (this interesting article from Boston Medical Library explains his appeal to British and American readers). 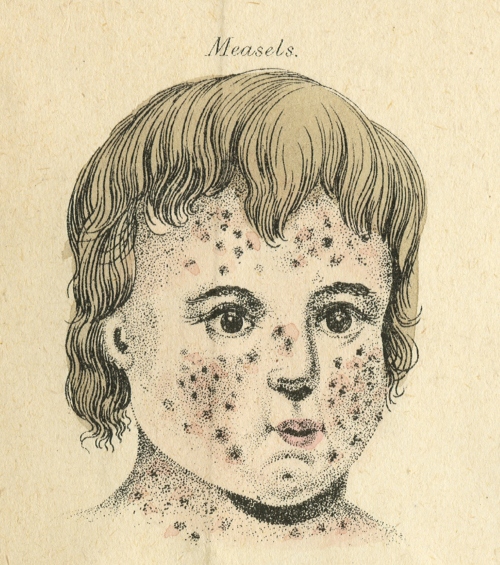 Dr Wells (1908-1978) was a fascinating individual, a doctor turned archaeologist.  He began his career in medicine in London, training at University College London and University College Hospital and specialising in obstetrics.  He also became interested in anthropology. Later, when he had moved to Norfolk, Dr Wells began to combine these two strands, using his medical knowledge to interpret archaeological finds and so shed light on the diseases and injuries suffered by ancient people and sometimes also on modern health problems. His best-known work was Bones, Bodies and Disease (1964). His widow, Winifred “Freddie” Wells, donated his books and archive to the University of Bradford in 1984. 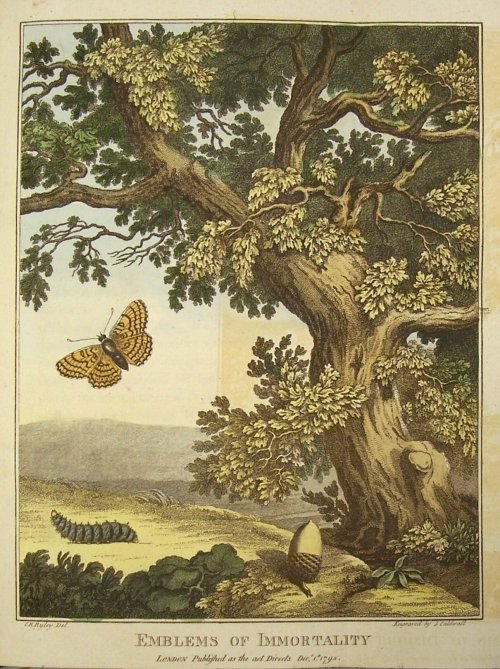 This beautiful engraving shows emblems of immortality (caterpillar to butterfly, acorn to oak tree).  It is from volume 2 of Thornton’s Philosophy of medicine (1799-1800) which is full of intriguing illustrations and interesting anecdotes.  This illustration accompanies an article about the brain in which the author defends ideas of the soul and immortality.

Both Calvin and Winifred Wells collected historic medical books.  Their book collection is particularly rich in 17th and 18th century volumes on gynaecology and obstetrics, by authors such as Thomas Sydenham, Francois Mauriceau and William Smellie.  There are also 20th century works on archaeology and anthropology, practical medical and nursing works, and books on exotic travels, ear, nose and throat medicine, and the archaeology of Norfolk.

More on Dr Wells’ archaeological interests in a later Object!

59. Brilliant, Ruby, Sapphire: The Cabinet of Gems, by Samuel Batchelor

This week, meet one of my favourite items in Special Collections: The Cabinet of Gems, by Samuel Batchelor.

Its magnificent subtitle is: Vocabulary of Precious Stones, arranged according to their comparative value : together with a description of the largest known diamonds and coloured gems in the world; the commercial history of rough diamonds; an account of the pearl fishery and the regalias of England, Scotland &c.  Ours is the revised edition, printed in 1840 by W. Langdale of Knaresborough.

The Cabinet is an interesting book packed with quirky information, as the subtitle suggests.  I particularly like the fact it is printed in Yorkshire.  What I really love about this little volume though are the plates, especially the colourful illustration of gemstones, above.  I’ve re-used this many times (here and here, for example), to illustrate the point that Special Collections are themselves gems or treasures.  Sometimes they are hidden gems, uncatalogued and unknown; it is so rewarding to bring such collections to people’s knowledge, as we’re doing with this exhibition.

This week’s Object is probably my favourite of all the printed books in Special Collections at Bradford. 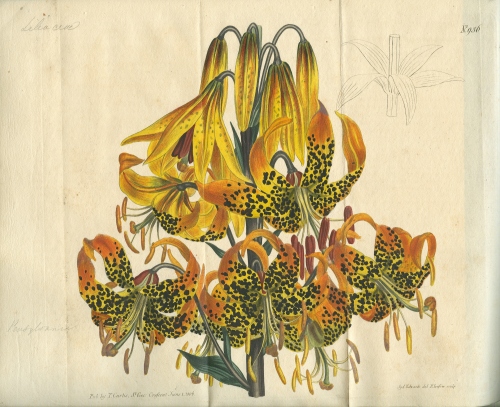 Curtis’s Botanical Magazine began in 1787 as The Botanical Magazine, or Flower-Garden display’d, founded by William Curtis.  It featured scientific details and hand-coloured images of ornamental plants plus information about how to grow them.  The Magazine was intended for “the use of such ladies, gentlemen and gardeners as wish to become scientifically acquainted with the plants they cultivate”.  Special Collections holds 1787-1817.

The reason I love this publication is obvious from these images: the stunning illustrations.  The contrast of these incredibly bright colours and beautiful flowers leaping from our rather drab bindings simply has to be experienced in person.  However, we’ve had a go at showing what we mean in this video.

The illustrations are hand-coloured copper engravings.  The colours used and skills varied between colourists, so each copy of the early years of the Magazine is unique.

The Magazine was highly successful and remains a respected reference source: it is still published by Wiley-Blackwell on behalf of the Royal Botanic Gardens, Kew.

See more beautiful images and further information about Curtis and the Magazine in this feature by Glasgow University Library Special Collections.  And the reproductions are particularly gorgeous in this blog post by St Andrew’s University Special Collections about their copies of this fantastic work (first in a series of Inspiring Illustrations, well worth following if you enjoyed this post).

Special Collections at Bradford offers a range of materials to help staff and readers handle fragile objects carefully.  For example, the Clarkson Book Support System, which we call the Foam Family.  The System was designed by conservator Christopher Clarkson with Polyformes (also available from other conservation supply firms).   The foam wedges range in size from mini to massive and help support open volumes so their spines aren’t broken. We also offer booksnakes and weights, to hold down maps and other rolled items without damage.  Pencils avoid damage from ink; cotton gloves keep photographs free of sweat.

Special Collections staff teach our visitors  how to handle original archives and rare books with understanding and respect.  This is part of our preservation policy.  Special Collections, like most organisations, has very limited funding available for conservation work on individual items.   So we rely on preservation: simple, cost-effective ideas which prevent damage to collections occurring in the first place. 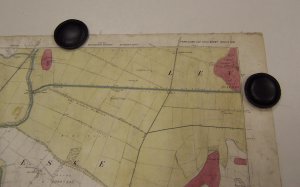 5. Poems in Stone: A Land, by Jacquetta Hawkes 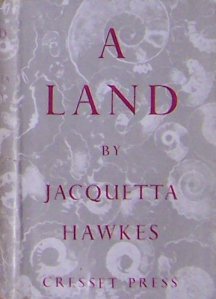 A Land, published in 1951, was the masterpiece of an extraordinary writer and archaeologist.  Drawn to the deep past and the study of nature since childhood, Jacquetta Hawkes (1910-1996) combined a poetic imagination with scientific understanding.  A Land united these to create a unique work that tells Britain’s million-year story in a compelling new way.

Jacquetta Hawkes by a waterfall ca. 1951

As Jacquetta said in her preface to the book, “The image I have sought to evoke is of an entity, the land of Britain, in which past and present, nature, man and art appear all in one piece … I see a land as much affected by the creations of its poets and painters as by changes of climate and vegetation”.  Typically, Jacquetta began the book with her own experience, lying on the ground of her back garden in London, which made her think about the geology below.

A Land tapped in to a contemporary revival of interest in Britain, its history, its distinctive past, its visual heritage, and was itself an appealing artefact.  It featured colour drawings by sculptor Henry Moore; Jacquetta had discussed his creative use of the qualities of stones in the book. The book made a great impression at the time, and was awarded the Kemsley Special Award.  It continues to inspire.  Jacquetta’s view that humans could not be separate from nature is more resonant now than ever.

The Jacquetta Hawkes Archive at the University of Bradford covers the development of the book: manuscript, typescript, different editions, illustrations.

Some of our archives documenting A Land, on show Ilkley 2010

To find out more about Jacquetta:

A life online: Jacquetta Hawkes archaeo-poet, by Christine Finn Biography of Jacquetta by a fellow archaeologist and writer.

Our Jacquetta Hawkes blog.  News from Christine Finn and Special Collections, and reflection on Jacquetta’s work and ideas.