91. Barbed Wire and Curfew Passes: a Friend reports on Cyprus, 1958

“If I was looking for trouble, here it is”, Quaker activist and academic Eric Baker wrote from the increasingly tense city of Nicosia in Cyprus on the 12 June 1958. In a series of letters circulated by the Friends Peace Committee, Baker told of “barbed wire, curfew passes, security checks and a heat that blisters the road under your feet”.

This week’s Objects are Baker’s press identity card, which accredited him as a journalist for Quaker journal The Friend, and his curfew pass, which allowed him to travel during curfew hours.  Baker did indeed write about Cyprus for The Friend and other magazines and newspapers, but accreditation mainly served to enable him to travel more freely than would otherwise be the case.

Baker was really in Cyprus to investigate the situation and see whether Friends might be able to assist.   He was sent by the Friends Peace Committee, who were increasingly concerned at the growing violence on the island.

Baker (1920-1976) had been a pacifist since childhood, joined the Society of Friends while at School and registered as a conscientious objector during the Second World War.  At the time he went to Cyprus he was General Secretary of the National Peace Council.  The evidence in the Eric Baker Archive suggests that Baker was ideal for the mission, being analytical, tactful, experienced and able to communicate with people from all sides.  He apparently knew Cyprus well and had travelled there before. 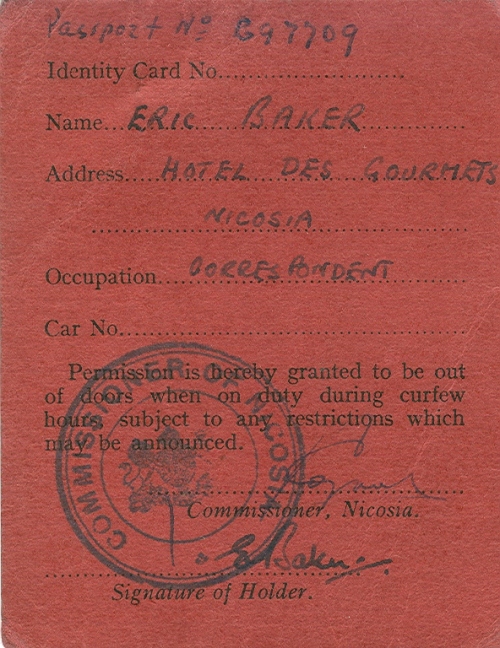 Baker spent several weeks in Cyprus during June and July 1958, mainly in Nicosia as it proved impossible to travel because of increased curfews.  He met Sir Hugh Foot, the Governor, and his deputy, commissioners in charge of prisons, welfare and labour, educationalists and diplomats, and a small group of refugees.  Eric Baker concluded that the situation was extraordinarily confused, featuring multiple conflicts: “Right wing against Left wing Greeks, Right wing v. Left wing Turks, Greeks v Turks and both against the British”.  In answer to the question he went to consider, he concluded that there was little that Friends could do to help at the present time, other than to watch in case opportunities arose to offer assistance.

Eric Baker visited Cyprus on behalf of the Committee again in 1959 as part of a trip which also took in Greece, Turkey, Malta and a private visit to see the work of Danilo Dolci in Sicily.  He returned to a now-independent Cyprus in 1967 and to the divided island in 1975, with Michael Harbottle.  The Eric Baker Archive is full of rich and detailed material on all these activities: articles, reports and letters by Baker, and extensive correspondence with all sides.  The Archive also reflects Baker’s later work in campaigning for prisoners of conscience and the end of torture, notably his role in the founding of  Amnesty (later Amnesty International) by Peter Benenson in 1961.

Note on sources: quotations from circular letters from Eric Baker Archive, Cwl EB 1/L.  The two cards are from file Cwl EB 1/E.  They are undated, so we cannot be sure whether they date from the 1958 or 1959 visit or both.

This week’s Object sheds light on another aspect of the life and ideas of Dr Arthur Raistrick (we already encountered his Yorkshire map inscriptions in Object 10).  It is an inscription by Dr Raistrick on a copy of A book of Quaker saints by Lucy Violet Hodgkin, published in 1917.  The book contains mini-biographies of George Fox and other key individuals in Quaker history.  In the inscription, Dr Raistrick explained what the book meant to him when imprisoned as a conscientious objector in Durham Jail during the First World War:

“I think this came into the small Quaker library in Durham Jail soon after publication in 1917.  It was a great discovery for all of us and helped to bring Fox’s Journal, Sewell’s History and a lot of the early journals to life.   Two which I was reading when this appeared were Stephen Grellette and Caroline Stephens, and I bought copies of all three as soon as I could, after my release,  and still value them.  They are very precious.  It was a great stay and strength in jail for many of us”.

The annotation is a wonderful example of provenance: how evidence left by a book’s owner can tell us more about the book itself and the person involved.

Raistrick at the time he was imprisoned was not actually a member of the Society of Friends: he joined later, in 1919.  However he was clearly already sympathetic to their ideas.   This little note shows how important Quaker ideas and history became to him.   It also illustrates his deep interest in the writings of past Friends.   He built up a large collection of such publications, many now held by Special Collections at the University of Bradford, in the Quaker and Raistrick book collections.  His interest in Quaker history also linked up with his love of Yorkshire landscape, as he developed interests in the study of lead mining and other industries with strong Quaker connections, especially the London (Quaker) Lead Company.  Witness books by Dr Raistrick such as Two centuries of industrial welfare, Silver and lead, and Dynasty of iron-founders (about the Darbys of Coalbrookdale).

Raistrick’s books generally are full of intriguing provenance: he was a great annotator and liked to explain how he came by his books.  For instance, this copy of Quaker saints also includes the note, “Arthur Raistrick 1919 given to me on my release from prison Sept. 1919”.

It is particularly pleasing that we have Raistrick’s copies of the other works he mentioned in the featured inscription: a memoir of Stephen Grellet by William Guest,  and Quaker strongholds by Caroline Stephen.  An inscription in the latter gives us another aspect of Raistrick’s wartime imprisonment: “A. Raistrick No. 4559 B.2.17. H.M.P. W.Scrubbs. 1.4.1918.” i.e. Wormwood Scrubs.