86. Scientists in the Quest for Peace: Joseph Rotblat, the Manhattan Project, and the Pugwash Conferences

This week, we explore the work of a remarkable scientist and humanitarian who turned away from work on the atom bomb: Professor Joseph Rotblat (1908-2005). 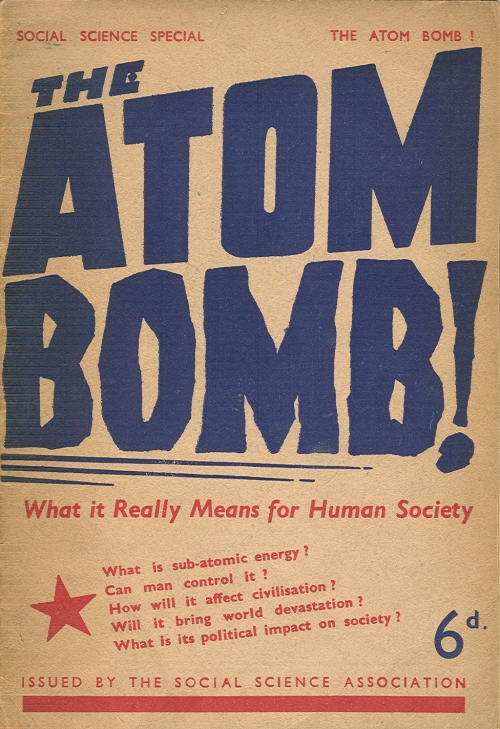 I chose this little pamphlet to introduce Rotblat’s book collection, because it was published in August 1945 i.e. just after the two atom bombs were dropped. Not written by Rotblat, however it discusses the concerns to which he devoted his post-war career and illustrates the range of the collection: science fiction explorations of nuclear issues, alongside pamphlets like this one , reports and textbooks.

A pioneer of atomic physics at the Free University of Poland, Jo Rotblat came to Liverpool University in 1939, drawn by the opportunity to work with James Chadwick and his new cyclotron.  Rotblat caught what was to be the last train out of Poland; his wife, Tola, sick with appendicitis, was due to follow, but was unable to leave in time – she later died in a concentration camp.  Chadwick took Rotblat to Los Alamos in 1944 as part of the team working on the Manhattan Project: developing a workable atomic weapon.

Cover of War and Peace, The Life and Work of Sir Joseph Rotblat. This delightfully personal and informative book from Liverpool University looks at themes in his life and includes memories of those who knew him and lots of interesting images.

However, Joseph Rotblat took the difficult decision to leave the Project later that year.  He had agreed to work on the weapon because of the fear that Nazi Germany would develop theirs first, but he realised that the Allies’ resources put them far ahead in this race.  He was also shocked by the project’s looking towards future conflict with (and use of weapons on) the USSR.

Thereafter Jo Rotblat directed his research towards the beneficial uses of nuclear physics, especially in medicine.  He settled with his remaining family permanently in Britain, returning at first to Liverpool, then becoming Professor of Medical Physics at St Bartholomew’s in 1949 where he worked until his  retirement in 1976.

Above all he encouraged his fellow scientists to consider the social impact of their research and to seek to remove nuclear weapons from this earth.   In 1955 he was one of the distinguished scientists who signed what became known as the Russell-Einstein Manifesto: drawn up by peace campaigner Bertrand Russell and signed by Einstein just before his death, the Manifesto outlined the need for peaceful ways to resolve conflict rather than war given the arrival of weapons which could obliterate humanity and that “we feel that scientists should assemble in conference to appraise the perils that have arisen as a result of the development of weapons of mass destruction”.

Scientists in the Quest for Peace, Joseph Rotblat’s history of the Pugwash conferences, is an essential read if you’re interested in him or the conferences. It also includes many useful appendices.

The first Conference of Science and World Affairs took place in 1957, at a Canadian village called Pugwash, which gave its name to later meetings.  Rotblat played a key role in setting it up, held many offices within Pugwash, and has often been described as its moving spirit.  His and their work was recognised by the award of the the Nobel Peace Prize in 1995, “for their efforts to diminish the part played by nuclear arms in international politics”.

Jo Rotblat’s work has a particular resonance at the University of Bradford.  He shared the concern of our first Vice-Chancellor, Ted Edwards, around the social responsibility of scientists and science and was instrumental in the creation of the first Chair of Peace Studies.  These links were recognised by the award of Honorary Doctor of Science in 1973.

Special Collections holds Rotblat’s book collection: works by and about him, works presented by their authors (often with interesting dedications which show the esteem in which he was held) and a huge range of popular and academic works on nuclear issues and the social responsibility of scientists.  He appears throughout our archives of peace and nuclear campaigns, from his involvement in the early days of CND during the 1950s to his support for the 1990s Campaign to free nuclear whistle-blower Mordechai Vanunu.

Note on sources. In addition to the above titles, Ending War which includes Rotblat’s essay on leaving the Manhattan Project.  Rotblat’s Papers are at Churchill College Archives.  Other useful websites include Pugwash Conferences and the 1995 Nobel Peace Prize page.

One response to “86. Scientists in the Quest for Peace: Joseph Rotblat, the Manhattan Project, and the Pugwash Conferences”