67. From the Shadows of Exile: the autobiography of Nellie Driver

From the Shadows of Exile is the unpublished autobiography of Nellie Driver (1914-1981), from Nelson, Lancashire.  She was active in the British Union of Fascists and was imprisoned as a result during the Second World War under Defence Regulation 18b.   The autobiography has been a key source for researchers, offering a detailed, first-hand perspective on the BUF in the North-West and its place in the life of a working-class woman. 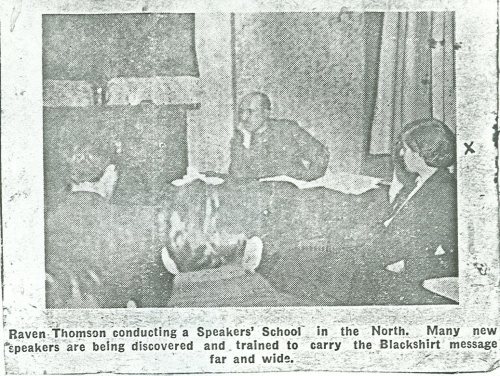 Nellie Driver (marked with X) at BUF Speakers’ School, reproduced in From the Shadows of Exile.

Shadows covers Nellie’s difficult childhood and youth, blighted by illness, business failure, unemployment and extreme poverty (at one stage she and her mother relied on driftwood for fires and neighbours for food).   Both women joined the BUF in 1935, when the movement was seeking to increase its membership among unemployed textile workers in the North West.   Nellie was personally drawn to fascism because of the apparent solutions it offered to the Depression, because of its romantic appeal, and above all because it gave her a direction in life.  She had previously sought this in religion but had become disillusioned.  Nellie came to play a vital role: she was organiser for her district, attended meetings, wrote to newspapers, sold party publications such as Action, put leaflets through doors …  The autobiography is most detailed on her time in prison, first at Holloway and then on the Isle of Man, covering routines, the people she met and the evolution of her ideas: she was drawn again to religion, and eventually became a Roman Catholic.

Card from Nellie Driver’s cell door during her imprisonment, reproduced in From the Shadows of Exile. Note the deletion of “No religion” and replacement with “R.C.” i.e. Roman Catholic.

The autobiography is part of a collection of material about fascism in Northern England gathered by Stuart Rawnsley while researching his PhD at the University of Bradford, Fascism and Fascists in Britain in the 1930’s (1981).  It also includes The Mill, an unpublished novel by Driver based on her experiences, and interviews with her and other BUF supporters.  It links with many of our other collections from the 1930s and 1940s: e.g. Object 64, the experiences of another (non-fascist) internee, and Object 38 , J.B. Priestley on the terrible poverty experienced in the North during the 1930s.

PS Our copies of Shadows are reproductions: originals are held by Local Studies at Nelson Library.  In addition to Dr Rawnsley’s thesis, I found this article by David Mayall extremely useful in writing the above:  “Rescued from the Shadows of Exile: Nellie Driver, autobiography, and the British Union of Fascists”, in The Politics of Marginality, Cass, 1990 (a preview which omits some pages can be seen via Google Books).