When we are Married (1938) is probably Priestley’s best loved play, his comic masterpiece.   It is set in the world of Priestley’s youth, the West Riding before the First World War, the setting that evoked his best writing, such as Bright Day (Object 53). Like the novel, WWAM brings to life a world of solid comfort and eccentric, larger than life characters, respectable but set in their ways, self-satisfied, possibly selfish and narrowminded.  An Inspector Calls (Object 19) uses tragedy and mystery to shatter the illusions of such characters and make Priestley’s point about the need for society to care for all.  WWAM also creates and then breaks apart that world, but for comic effect.

Three very respectable married couples, the Helliwells, Soppitts and Parkers, married on the same day by the same parson, are celebrating their joint Silver Wedding anniversaries.  Confronting Gerald Forbes, the young “la-di-dah” “Southerner” chapel organist about his “goings-on”, the men learn from him  that the parson was not authorised … their marriages were not in fact legal … There follows tightly constructed farce full of embarrassments and plain speaking: Herbert Soppitt confronts his bossy wife Clara; Annie Parker reveals to her pompous husband Albert that he is dull, dreary and stingy and that she’s had enough! 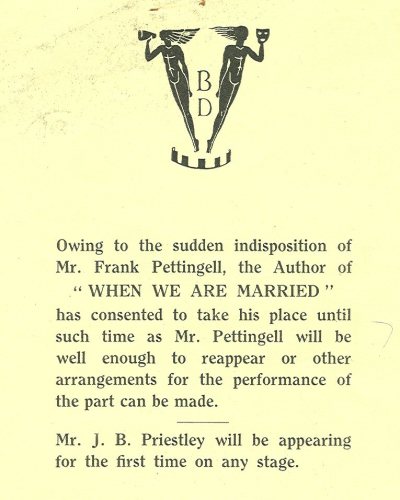 The J.B. Priestley Archive tells the story of this play and its many productions.  This slip is fascinating:  Priestley himself acted in the first London production of the play (St. Martin’s Theatre, produced by Basil Dean). To save the show, which had just opened, he stood in as the comic drunken photographer Ormonroyd when the actor Frank Pettingell was injured in a motor accident.  Priestley wrote in the memoir Margin Released that he knew his lines and “duly got my laughs” but didn’t find the experience rewarding.